Rtn. Dr. G.S. Madaan and Rtn. Dr. Kuldeep Singh Arora are the charter members and the past presidents of Rotary Club of Amritsar North. This club had a dream to do something exceptional for humanity. After spending a lot of time in Rotary, they got to know a lot of things and explored a lot to every extent to make this dream real. In 2016-17, Rtn. PP Dr. G.S.Madaan attended the Rotary convention at Atlanta (USA) and there PDG Dr.SPS Grover introduced him to Rtn.Dr. Rajinder Singh from Malaysia who was the RI President Representative of Rotary District 3070 convention in the year 2018-19. He joined the fellowship of Rotarian doctors and had a great discussion with him about Rotary and projects taken thereon. After attending the convention, he met his cousin Rajpal Singh, a software engineer, at California and discussed the idea of donating to Rotary cause. He really got inspired by the Rotary spirit and decided to donate a great amount for the projects. But this was just the beginning. Still that dream project was incomplete. After attending Rotary conventions at Toronto, Canada year 2017-18 and RI convention at Hamburg, Germany year 2018-19 and becoming a major donor in the year 2017-18, he finally decided to open a dialysis centre for the patients.

It is always said that real dreams are those which never allow you to sleep and such a dream never allowed this Club to stop. Rtn. Dr. Madaan started discussing about setting up a dialysis centre with his doctor friends and fellow Rotarians of the Club. He finally planned this project with Rtn Dr. Kuldeep Singh Arora and decided to set this dialysis centre at his hospital i.e. KD Ganesha Hospital. But it was a long journey to cover. So to finish the journey and the dream project he tried his best to meet Rtn. Dr. Rajinder Singh of Malaysia (Rotary Club of Teluk Intan- Distt.3300) but failed every time. Finally he met Rtn. Dr. Rajinder Singh along with PDG Rtn. Upkar Singh Sethi (DRFC at that time) in a District conference of 3070 of 2018-19 at Jalandhar city and explained him about this dream project. After the complete discussion, Rtn. Dr. Rajinder Singh decided to become global partner and decided to donate $ 4000 for this project. Rtn. Dr. G.S.Madaan- Major Donor discussed the plan with his cousin too. And then his cousin Mr. Rajpal Singh who is non Rotarian, donated $ 5000 for this great project. Rtn. PDG Vinod Bansal of Rotary Club of Faridabad Royals was also approached and was kind enough to arrange $6000 for this nobel cause. Rtn Barjesh Singhal Distt. Governor 2018-19 was also kind enough and arranged $3500 from district funds. It is worth to mention here that a must requirement of community survey was completed with the help of PDG Rtn Gurjit Sekhon. After applying for the foundation grant, the Club received the grant worth $ 44,091.64. So finally after setting up the things with doctors and the team, Club finally made this dream real and the dialysis centre was inaugurated during the Presidentship of Rtn. Ramesh Mahajan and Secretary Rtn. Kuljit Singh on 18/08/2019 by Sh. Gurjeet Singh Ahujla, MP.Amritsar and Rtn. Sunil Nagpal, Distt. Governor 2019-20.

We will be failing in our duty if we do not mention the names of the Rotarians and non Rotarians who contributed generously for the success of this project. Mrs. Daljit Kaur Arora, Dr. Dushyant Thaman, Dr. Sanjay Khetrapal and Dr. Rajneesh Kapoor along with core committee members Rtn. PP R.K.Uppal, Rtn. PP R.S.Chattha, Rtn. PP Rasjit Singh Khera, Rtn. Rajinder Pal Singh and Rtn. Kuldeep Rai Nanda not only made cash contributions but also gave their untiring services for the success of the project.

This Centre is doing the dialysis just at normal cost of Rs.1100, which is much less of the charges taken by other dialysis centers and hospitals in the city. They even do the dialysis free of cost for the needy people and this service is open to all without any discrimination. This is a setup of 4 machines which can do the dialysis for 8 patients in a day and all the expense of medicines and the kits is born by the hospital and the club. The centre has completed 460 dialysis up to 21.05.2020 in just 230 working days since its inauguration.

To have such an exceptional permanent project in our district is a matter of proud. Best wishes to Rotary club of Amritsar North and the hardworking team.

Written and compiled by 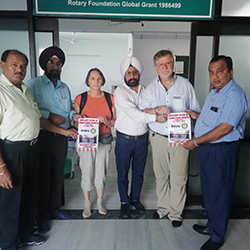 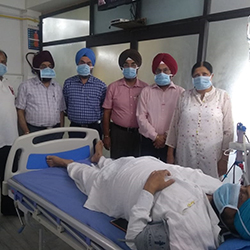 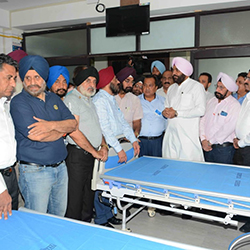 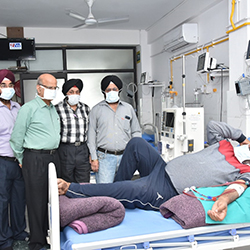 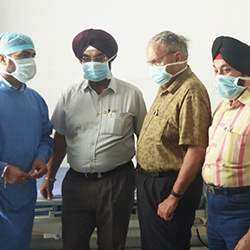 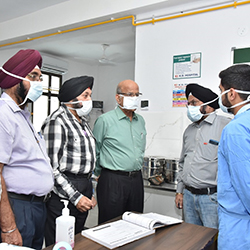 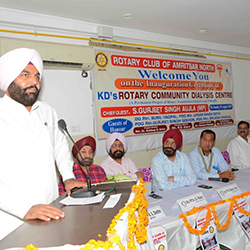 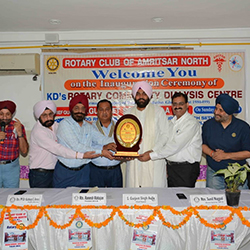 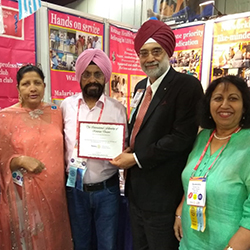 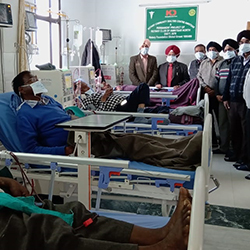 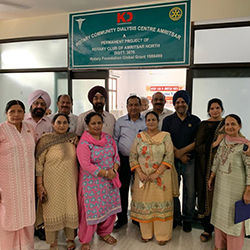 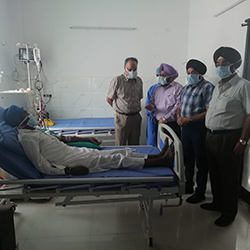 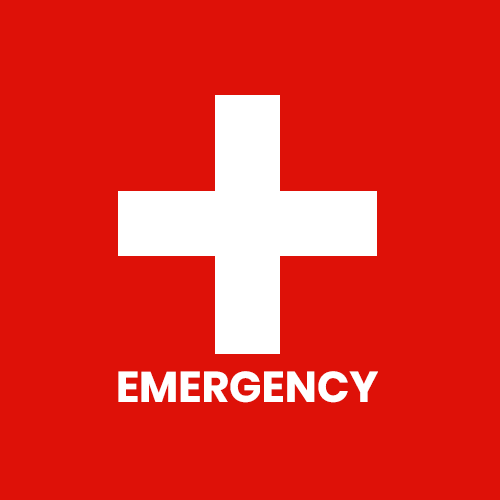